PHG Energy has partnered with the City of Lebanon for a new waste-to-energy gasification plant commissioned Thursday in Lebanon, Tennessee.

The plant utilizes patented downdraft gasification technology that has been thoroughly vetted in commercial and municipal deployments.

“This facility is going to be a model for waste-to-energy partnerships as well as the first stage in moving our city completely away from dumping waste into landfills,” said Lebanon Mayor Philip Craighead.

On Thursday, Lebanon and PHG Energy gave tours of its new plant to people from around the world. Once the tour buses arrived at the plant, PHG Energy staff members further explained that all the spare tires in Wilson county and scrap wood from any business within a 20 mile radius will be converted into energy through a process called gasification.

The wood and tires will first be shredded down so they can fit inside the plant’s special bins to process it. From there, through a series of chemical processes, 95% of the material that goes into the gasifier comes out as hot water that is used to power the nearby water treatment plant, reducing electricity costs by two-thirds. The other five percent converts to a carbon-rich biochar that the city plans to sell to local farmers to fertilize crops. 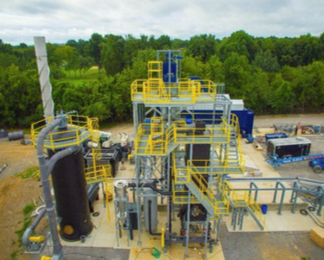 This new plant is saving the city money not only from the clean electricity generation. But also because the city landfill is less than a decade away from capacity. The gasification plant will save landfill space keeping millions of pounds of waste out of it.

Rockwood Recycling is supplying the $800,000 chipper for the city to use, so the city won’t have to pay for its own equipment. Each year Rockwood Recycling is responsible for recycling more than 28,000 tons of materials across the state for beneficial reuse and to keep them out of the area landfills. Lebanon’s gasification plant is an expansion of the city’s successful Think Green– Think Clean initiatives.