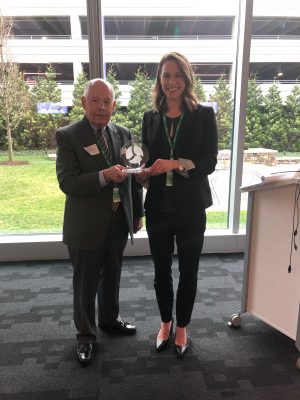 TAEBC received multiple nominations from an impressive array of individuals, including local business leaders, academia, and company executives. The winner will be contacted soon.

Ballard was TAEBC’s first president upon its launch in 2014 and served on the board of directors until 2019. He is currently the Chief Alliance Officer of Pershing Yoakley & Associates and serves as editor of Teknovation.biz, an online service launched in 2011 to spotlight and celebrate all things related to technology, innovation and entrepreneurship in Tennessee.

The first-ever award went to Ballard himself, during TAEBC’s 2019 Annual Meeting in Franklin, Tennessee.

“Without Tom Ballard, the Tennessee Advanced Energy Business Council would have never grown to the level of success it experiences today,” said Cortney Piper, vice president and executive director of TAEBC. “It’s impossible to measure Tom’s impact on Tennessee’s advanced energy economy with words alone, and for that reason he is most deserving of having an award being named in his honor.”

This year’s recipient will receive the award during TAEBC’s Annual Meeting on Thursday, March 5, 2020 at Schneider Electric’s Nashville Hub. If you would like to attend, please RSVP by following this link.