The Tennessee Advanced Energy Business Council is asking Tennesseans about their experiences owning hybrid cars in the state.

TAEBC spoke to Tammy Kaousias, a 2013 Toyota Prius owner. She bought the car new, taking advantage of up to a $2,500 tax credit. 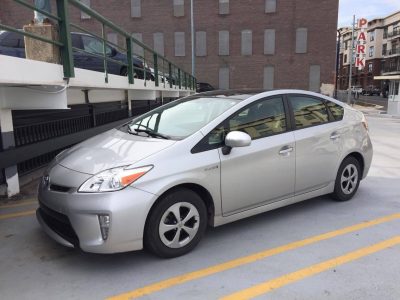 The Prius is also unlike the series hybrid, where the gasoline engine, instead of directly powering the wheels, serves only to charge the vehicle’s battery to provide power to the electric motor.

Toyota Prius technology however is a combination of both of the previous types and is known as a series-parallel hybrid. This is possible because of the Prius’ power split device, a special gearbox that connects the gasoline engine, electric motor and generator together in one unit.

TAEBC wanted to find out what drives Tennesseans to make the switch to a hybrid car.

Q: What made you consider buying a hybrid car?

A: I needed to drive to the beach, and I just had been looking and not yet test driven a Prius but knew that I was looking for a car that wasn’t entirely fossil fuel based. I didn’t think I’d like the Prius, but I loved it.

Q: What are some of the benefits you’re experiencing owning a hybrid car?

It’s small and it’s manageable but it’s roomy in the back. It’s just been an awesome car for me. It’s also great to tour around town in. You zip in and out to move around. It’s not bulky. This car going in and out of parking lots just seems a lot easier. It’s a lot faster, in terms of it’s just not that heavy.

Q: Did an outsider influence you to want to make this switch?

I think it was really just the awareness of all of the changes happening in the environment and the industry.

Q: Was gas prices high during the time?

It wasn’t really was that it was up high. To be honest, I was really amazed when I saw the regular fossil fuel cars, how efficient they had gotten since the last time I had been in the market for a car. That was actually interesting to me because I realized just merely getting a new car, I would be reducing my carbon footprint.

I actually like the Prius as a family every-day car. Since then my husband and I have used it for a lot of long trips. That’s when I really see the gas savings. I still have to get gas with this car, and it takes no time to fill it up because it’s got a small tank. I didn’t really have an outside influence. I knew I had met some people who had loved their Prius, but I never met anyone who hated them.

Q: Would you recommend the car to others?

I would because I love it. I would recommend anybody to look into this car, particularly for a starter car. It’s worth the investment.