(Crossposted from the University of Tennessee at Knoxville)

The U.S. Department of Energy today awarded $20 million to the new Oak Ridge Institute at the University of Tennessee to expand the university’s partnership with Oak Ridge National Laboratory to train the next generation of American scientists and engineers.

“This $20 million federal grant is in support of an institute that is the culmination of 40 years of effort to merge the strengths of the University of Tennessee, Knoxville, and Oak Ridge National Laboratory,” said U.S. Sen. Lamar Alexander of Tennessee. “The Oak Ridge Institute will be a pipeline for a new supply of American-trained scientists and engineers, which our country sorely needs in this competitive world. It will also combine the resources and experience of the nation’s largest science and energy laboratory and a major research university. Already, the UT–Oak Ridge partnership has 250 joint faculty, five joint institutes and 250 PhD students in jointly administered energy and data programs. With such a strong foundation and such strong current leadership, I am betting that during the next 80 years, the Oak Ridge Corridor brand and the Oak Ridge Institute will be recognized as one of the most important science and engineering alliances in the world.”

For the past six years, Alexander has been chair of the Senate Energy and Water Subcommittee on Appropriations, which provides funding for the national laboratories.

“We are thankful to the Department of Energy for its support of this program that will deliver a top-tier interdisciplinary workforce talent in emerging fields for industry, government, and academia,” said UT System President Randy Boyd. “This is the first step in establishing ORI as a force to change our state and nation.”

Volkswagen, the University of Tennessee, and Oak Ridge National Laboratory (ORNL) have partnered to create the automaker’s first innovation hub in North America. The hub will be located at the UT Research Park at Cherokee Farm. Key stakeholders recently held a press conference at UT Research Park to announce the collaboration and hold a formal ribbon cutting ceremony.

According to the official press release, the collaboration involves research opportunities for doctoral students with initial work focused on creating lighter vehicle components made from composite materials, electric vehicles, and other innovative automotive pursuits. 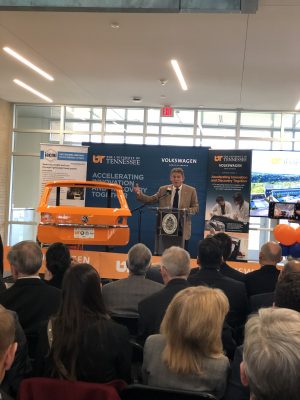 “Working with the University of Tennessee and Oak Ridge National Laboratory is a great opportunity to continue growing Volkswagen’s engineering footprint in the North American region,” said Wolfgang Demmelbauer-Ebner, VW’s executive vice president and chief engineering officer for the region. “This hub, along with other research institutions here, is an integral part of Volkswagen’s global research and development efforts and can also directly contribute to vehicles in North America.”

TAEBC welcomes advanced energy solutions and partnerships like the innovation hub. This opportunity reinforces the state’s goal of becoming the top electric vehicle producer in the country, as previously stated by Bob Rolfe, Tennessee Economic and Community Development Commissioner.

Oak Ridge National Laboratory (ORNL) and the University of Tennessee (UT) are among finalists that R&D Magazine has just announced for its annual “R&D 100 Awards.”

At times described as the equivalent of the Academy Awards, the recognition, now in its 56th year, have long been considered the most globally prestigious recognition of invention and innovation. The awards recognize 100 of the top innovations across five categories: analytical/test, IT/electrical, mechanical devices/materials, process/prototyping, and software/services.

The finalists were selected by an independent panel of more than 50 judges representing R&D leaders in a variety of fields.

Held at The Square Room in Downtown Knoxville, the theme of this year’s annual event was entrepreneurship and innovation. The nearly three-hour program featured a fireside chat with two leaders in the region that I had the privilege of moderating as well as pitches from three start-ups in the Energy Mentor Network coordinated by TAEBC and funded by Launch Tennessee.

Beverly Davenport, the new Chancellor of the University of Tennessee’s Knoxville campus, and Craig Blue, Director of Energy Efficiency and Renewable Energy Programs at Oak Ridge National Laboratory (ORNL), comprised the fireside panel that I facilitated. The focus was on the foundations their institutions have established, the plans they have for the future to help Tennessee build on its national reputation for excellence in the advanced energy sector, and how their innovation efforts can help create new businesses and expand existing ones.

The University of Tennessee has received a 2017 green power leadership award from the US Environmental Protection Agency.

“This is UT’s top environmental and sustainability award to date, and we look forward to achieving a higher standing in the years to come as our campus moves toward a more sustainable place to learn, live, and work,” Jacobsen said.

In addition, UT ranks 35th on EPA’s National Top 100 list, and first on the Top 30 College and University list. Each list highlights EPA Green Power Partners using the most renewable energy annually as of July 2017.

“Being honored among the nation’s top green power users is affirmation that our program is among the nation’s best, but to receive this latest award is quite an accomplishment for our university,” Jacobsen said. “It places UT among the ranks of Google, Apple, and Microsoft as organizations who not only champion sustainability but put these technologies into action.”

UT was one of only eight organizations nationwide to receive an Excellence in Green Power Use Award.

UT is currently purchasing nearly 246 million kilowatt-hours (kWh) of green power annually, which is enough to meet 95 percent of the organization’s electricity use.