A recent article by Jesse Jenkins and Alex Trembath published on The Energy Collective website takes a look at the growth of wind and solar power industries over the past few decades and aims to answer the question, “How far have we come exactly?”

The article states that the wind and solar power industries “are growing rapidly and are beginning to move the needle in global energy supplies.” In the past, renewable energy growth has been fueled by deployment subsidies and other support policies such as feed-in tariffs, tax credits and portfolio standards. But with the spark of public interest and investment in renewable energy adoption, the wind and solar industries have taken great leaps.

These great leaps have become apparent; from 2008 to 2013, wind turbines almost tripled the amount of electricity generated globally, while solar energy generation grew by more than ten times. Together, wind and solar jumped from providing 1.1 percent of the world’s electricity in 2008 to 3.3 percent in 2013. Tremendous growth, but in order to keep up with (or replace) coal and other fossil fuels, wind and solar will have to continue on this rapid growth pattern.

The questions many are asking now are: How much of a role will the renewable energy sector take, and how will it impact the energy system?

Many countries (U.S. included) are incorporating renewable energy by using an integrated grid system. This system allows countries or states to share energy depending on the energy needs of the region. An example of an integrated grid is seen in the Great Plains, Midwest, and in Arkansas and Louisiana; this regional energy market is called the Midcontinent Independent System Operator (MISO). So how does the integrated grid system work? One example: in 2014, Iowa generated 28.5 percent of its energy through wind power. This power was used throughout the MISO region and ended up supplying almost 6 percent of MISO’s power demands in 2014.

This growth is making a difference in our own backyards. Tennessee’s solar and wind industries are gathering steam, creating new sources of renewable energy and hundreds of jobs all over the state. Read TAEBC’s Roadmap for Tennessee’s Advanced Energy Economy to learn more about the roles that these two industries have in driving the state’s economy.

Source: “A Look at Wind and Solar Energy, Part 1: How Far We’ve Come” by Alex Trembath and Jesse Jenkins

TAEBC’s annual meeting in Nashville on March 26 served as a forum for members to provide feedback on 2015 projects and priorities that foster the growth of Tennessee’s advanced energy jobs, companies and technologies. As well as determine the best role for TAEBC to serve as a champion, facilitator and convener of advanced energy projects and initiatives. Topics covered during the meeting included TAEBC membership, 2015-2016 event calendar, Tennessee Advanced Energy Economic Impact Report release strategy and 2014 successes.

Members agreed the greatest value of their TAEBC membership is networking opportunities and increased visibility of the industry. To build on this, TAEBC will launch a 12-month event calendar this summer. It will include another member delegation visit to Washington D.C. to meet with the U.S. Department of Energy to get our members questions answered and problems solved.

At the request of our members, TAEBC will submit comments on TVA’s draft Integrated Resource Plan (IRP). Comments will align with our mission and we’ll use the Tennessee Advanced Energy Economic Roadmap as the foundation for our remarks. Members who would like to be involved in commenting on the IRP should contact Allie.

Check out this E&E TV’s OnPoint segment, featuring Bob Martineau, president of the Environmental Council of the States and a commissioner of the Tennessee Department of Environment and Conservation.

What jurisdictional challenges exist within states between air agencies and public utility commissions in determining how best to comply with U.S. EPA’s Clean Power Plan? Martineau explains how states are working behind the scenes to figure out next steps on the plan. 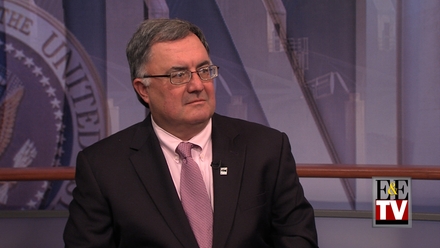 “We are very pleased with the success of this harvest and how our innovations continue to improve the process,” said Lance Stewart, certified supply chain manager of Genera. “As an example, in one 12-hour harvesting period, we processed 67 truckloads of feedstock biomass utilizing one harvester. In supply systems like biomass where weather is always a factor, speed and efficiency are critical for success.”