The Tennessee Green Star Partnership (TGSP) is TDEC’s environmental leadership program that seeks to recognize Tennessee Industries that are committed to sustainable practices and continuous improvement throughout their entire operation.

The Tennessee Green Star Partnership is a voluntary program for manufacturers located within Tennessee. Click here for more information.

The webinar will be September 12, 2018. The topic is to be determined.

The Tennessee Green Star Partnership (TGSP) is TDEC’s environmental leadership program that seeks to recognize Tennessee Industries that are committed to sustainable practices and continuous improvement throughout their entire operation.

The Tennessee Green Star Partnership is a voluntary program for manufacturers located within Tennessee. Click here for more information. 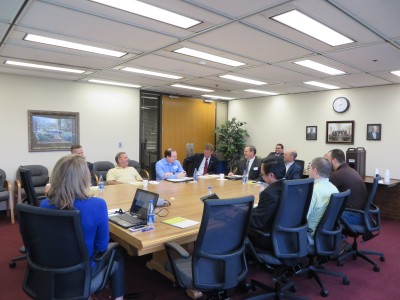 A big thanks goes to Knox County Mayor Tim Burchett for being our featured guest during a recent Tennessee Advanced Energy Business Council (TAEBC) listening session with Knox County manufacturers.

Major manufacturers in Knox County representing more than 2,500 jobs met last month to talk about energy challenges and opportunities. TAEBC representatives shared more information about who we are, what we do and how we might be able to work together to assist our manufacturers in gaining more control over their energy costs.

Take-aways from our roundtable were not surprising: Yes, there is a need for greater grid resiliency, and manufacturers are increasingly looking for ways to manage energy use and costs more efficiently.

There was certainly interest for TAEBC serving its education and connection functions through expanding its Asset Inventory and connecting our research assets and successful manufacturer energy efficiency case studies with Knox County manufacturers to deploy advanced energy technologies.

TAEBC will continue to work with its members and partners to determine how it can best connect our advanced energy assets to seize opportunities that will make our manufacturers more competitive by gaining more control of energy costs.

In some recent posts, we have elaborated on Tennessee’s high per-capita energy consumption and a gap in personal income. The final part to this series is discussing the potential of three major players – and explaining who they are.

Initiatives from three distinct components of Tennessee’s economy – the Tennessee Valley Authority (TVA), Oak Ridge National Laboratory (ORNL), and the automotive sector, including the massive assembly plants of General Motors, Nissan and Volkswagen – will have a disproportionate influence on the direction and success of the state’s efforts to promote an advanced energy economy. The ability to understand the assets that these three major economic players bring to the discussion, as well as their willingness to combine these assets in support of advanced energy technologies, will to a large extent shape the opportunities for sustained expansion of the advanced energy economy in Tennessee.

While the automotive sector represents what may be the single largest opportunity to expand the use of advanced energy technologies, significant opportunities also exist within other key clusters in which Tennessee, because of geography and a mature industrial base, has a competitive advantage. Examples include logistics, transportation and distribution services, chemical products and plastics, and advanced manufacturing.

Since its creation in the 1930s, TVA has played a major role in the growth of Tennessee’s manufacturing base and, more recently, in efforts to reduce the volume of sulphur and carbon emissions in the state’s air. TVA’s mission includes use of the agency’s resources to improve environmental quality and foster economic development. The scope of TVA’s energy portfolio makes it possible to pilot, incentivize and evaluate a variety of innovative clean technologies.

Increasingly, Tennessee’s inventory of advanced energy technologies is the beneficiary of breakthrough discoveries and initiatives at ORNL, the nation’s largest energy research institution, and the University of Tennessee. The Laboratory is at the forefront of innovation for biofuels, energy storage, solar technology and nuclear power. A close relationship with the University of Tennessee has resulted in the Laboratory becoming a vital part of the state of Tennessee’s economic strategy with successive governors.

In many respects, the initiatives of both TVA and ORNL are responsive to efforts by Tennessee’s automotive manufacturers to promote advanced energy technologies, both in their products and in the operation of their manufacturing facilities. In Smyrna, Nissan has made a historic investment in the design and manufacture of batteries and electric cars in Tennessee. In Chattanooga, Volkswagen operates Tennessee’s largest solar park, where 13 million kilowatt hours are produced annually to power 12 percent of the enormous manufacturing facility.[i] Each of Tennessee’s automotive manufacturers is looking over the horizon to innovative technologies and materials such as carbon fiber that will reduce weight and increase fuel efficiency.

The last decade has witnessed a growing willingness among the three major entities in Tennessee’s energy economy to partner in the deployment of innovative technologies. TAEBC views the ability to replicate this kind of cooperation as a key factor in expanding Tennessee’s advanced energy economy.