You’re invited to a TAEBC Zoom webinar featuring Los Angeles Cleantech Incubator (LACI) to discuss the status of a $150 billion federal stimulus proposal to strengthen our nation’s transportation infrastructure and what it could mean for Tennessee. RSVP HERE!

There will be a 15 minute presentation by the organizers followed by Q&A from the audience.

TAEBC signed on to this proposal in July as we can again look to the advanced energy sector for economic recovery. This presentation will cover what this investment could mean for Tennessee as state leaders eye Tennessee becoming the top spot for the country’s EV supply chain and implement statewide electrification plans.

Zoom links and dial-in information will be shared at a later date.

New findings show this proposal could create up to 2.3 million jobs across the U.S. boosting employment in all sectors, with 1.4 million jobs expected to build out our nation’s zero emissions transportation infrastructure alone.

These investments in the nation’s transportation infrastructure would be in direct response to the economic and health crisis caused by the COVID-19 pandemic.

New findings show TEP’s proposal could create up to 2.3 million jobs across the U.S. The research from economic advisory firm HR&A estimates the proposed $150 billion in stimulus investment would boost employment in all sectors, with 1.4 million jobs expected to build out our nation’s zero emissions transportation infrastructure alone.

As we welcome 2018 and anticipate what it will bring, the Tennessee Advanced Energy Business Council (TAEBC) is marking its 2017 achievements.

By championing advanced energy as an economic development and job creation strategy, TAEBC is positioning the state and its members to increase our leadership role in the $1.4 trillion global advanced energy market.

As we enter into a New Year that will likely bring new opportunities and challenges, TAEBC wants to reinforce our commitment to our members and stakeholders:

As we look forward to our annual membership meeting in Nashville, TAEBC shares our top accomplishments from 2017.

Remember to save the date for the next TAEBC event, Wednesday, February 28 in Nashville and help plan for a successful 2018.

In 2007 the National Academy of Sciences released the seminal report, Rising Above the Gathering Storm, to Congress focused on how the United States needs a coordinated effort in science and technology to create high-quality jobs and solve some of our most pressing societal challenges. It stated that “Research sows the seeds of innovation. The influence of federally funded research in social advancement – in the creation of new industries and in the enhancement of old ones – is clearly established.” 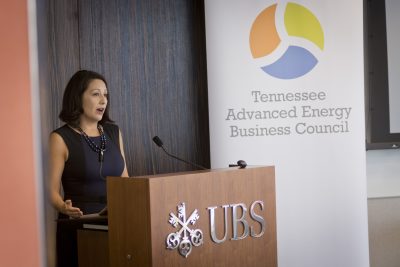 While this enhancement has been clearly established, the process and ability to easily commercialize federally funded research has not been established. The federal government has an obligation, not to mention a congressional mandate, to see that federally funded R&D is utilized. Yet, so many of us that work in R&D know that the pre-commercial valley of death between early-stage R&D project to prototype, and then on to pilot demonstration is a valley too great for most scientists, engineers, startups or entrepreneurs to address on their own. They must look to additional federal funding, which may be drying up, or to the private sector to further develop their science project into a commercial product.

Luckily, the State of Tennessee and the federal government have been taking steps to support early-stage innovators and the commercialization of technologies. Building off of the great work that was going on in Tennessee through its REVV program and the New Mexico Small Business Assistance Program, the federal government launched an innovative pilot program called Small Business Vouchers. This was designed to increase small business access to DOE’s national labs to develop and prototype the small business’ technologies. SBV has held three rounds of selections, connecting 144 small businesses with 12 national labs for a total of $22 million taxpayer dollars.

Yet, most startups have never even heard of a Department of Energy National Laboratory, let alone one of its great new programs. To better support startups and entrepreneurs, the Department of Energy also funded the Incubatenergy Network which is focused on accelerating the transition to a sustainable economy through national coordination of incubator resources supporting entrepreneurs focused on clean energy innovation and deployment. Organizations like Greentown Labs, Clean Energy Trust and many others help companies tap into a variety of resources, like the National Labs, that could help entrepreneurs bridge the early valley of death.

The Los Angeles Cleantech Incubator (LACI) is also one of those organizations. It is focused on creating an inclusive green economy. It was started in 2011 by the City of Los Angeles and has grown to be the hub of cleantech innovation in the whole region. It supports 40+ portfolio companies, which also benefit from the strong community of pro bono advisors and resources provided through LACI’s network. One way that LACI is helping to close the pre-commercial valley of death is by developing a scalable method to make low-cost microloans to early-stage hardware companies. It is focused on expanding investment from U.S. banks and Community Development Financial Institutions’ (CDFIs) into early-stage cleantech companies. This will help open up critical working capital to companies that are positioned for growth, but do not have access to traditional loans.

Other cities, like the City of Fremont California, are also in the game of early-stage innovation. In July of this year, the Fremont City Council approved a contract to develop a feasibility study for an innovation center on a plot of land owned by the City, adjacent to its new public transportation hub and across the street from Tesla’s assembly facility. LACI will lead a multi-disciplinary team to conduct this analysis. Fremont has a history of innovation, especially in manufacturing, and is at the cross-section between significant investor dollars, strategic R&D companies, advanced manufacturing, and strong universities and national laboratories.  Solving the early-stage finance and resource gap for startups may be the critical component that Fremont and other cities can catalyze to grow their community’s innovation ecosystem.

Jetta has over 14 years of experience developing programs and policies that support energy and environment technologies. Prior to joining LACI, Jetta Wong established the Office of Technology Transitions for the United States Department of Energy and served as its first Director. In that capacity, she assisted the private sector, state and local governments, universities, laboratories and other stakeholders and engaged with the Department on the commercialization of new technology.

She spoke about the status of cleantech, several cleantech accomplishments within the Department of Energy, and the organization she works for the Los Angeles Cleantech Incubator. 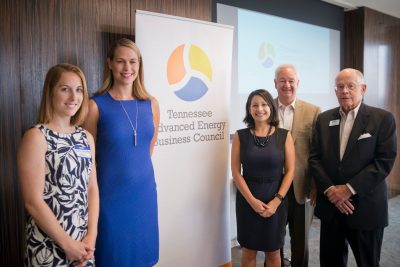 “Cleantech is here to stay, and it’s not just because we want it to but the numbers are there,” said Wong.

“Since 2008 distributed PV, utility-scale PV, wind power, and batteries have decreased in cost, and that’s what we need to see because that’s what innovation is all about,” said Wong.

She stressed the importance of economics and again that the cleantech sector is here to stay. She also talked about how the U.S. is in competition with China when it comes to cleantech. It’s been recently announced that China will invest $360 billion by 2020 in renewable energy, averaging $120 billion a year.

“We also need to be thinking about how we can bring private capital back into clean energy,” said Wong.