According to the report, this sector accounts for three in four of its jobs and employs nearly 1.9 million people nationwide.

In short, they figure out how to help homes and businesses run leaner by lowering utility bills.

For the Volunteer State, the report says about 27,500 Tennesseans work in energy efficiency related jobs. The majority of employment is focused on traditional HVAC and renewable and efficiency heating and cooling technologies.

There are also a few thousand workers who support Energy Star appliances, efficient lighting, and advanced material and insulation.

But Tennessee has representation across medium to large-sized establishments as well. Just over a quarter (27 percent) report 11 to 99 permanent workers, and nine percent note 100 workers or more. 63 percent of firms derive the majority of revenue from this work, with 37 percent noting all of their revenue is attributable to energy efficiency services.

Tennessee ranked 25th in the nation in the 2016 State Energy Efficiency Scorecard, moving up six places since the 2015 ranking. The state scored very low in the utilities category because both investments and therefore energy savings are lower than the national average (ACEEE).

When it comes to a county-by-county basis, the following counties had the highest recorded energy efficiency employment.

The following is a graph for Metropolitan Statistical Areas. (MSAs)

Here is a graph comparing energy efficiency employment to the corresponding congressional districts in numerical order. 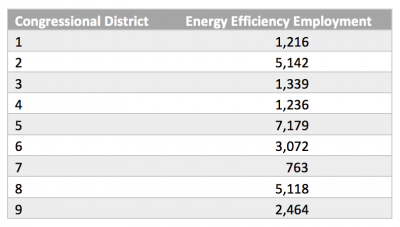 As the Tennessee Advanced Energy Business Council’s Economic Impact Report foretold in 2015, the advanced energy sector has but one direction to move in and that’s up.

A recent report released by the International Renewable Energy Agency – the Renewable Energy and Jobs Annual Review 2016 – shows that more than 8.1 million people worldwide are working in the global renewable energy industry. Renewables are one part of the advanced energy sector, but a growing sector at that. 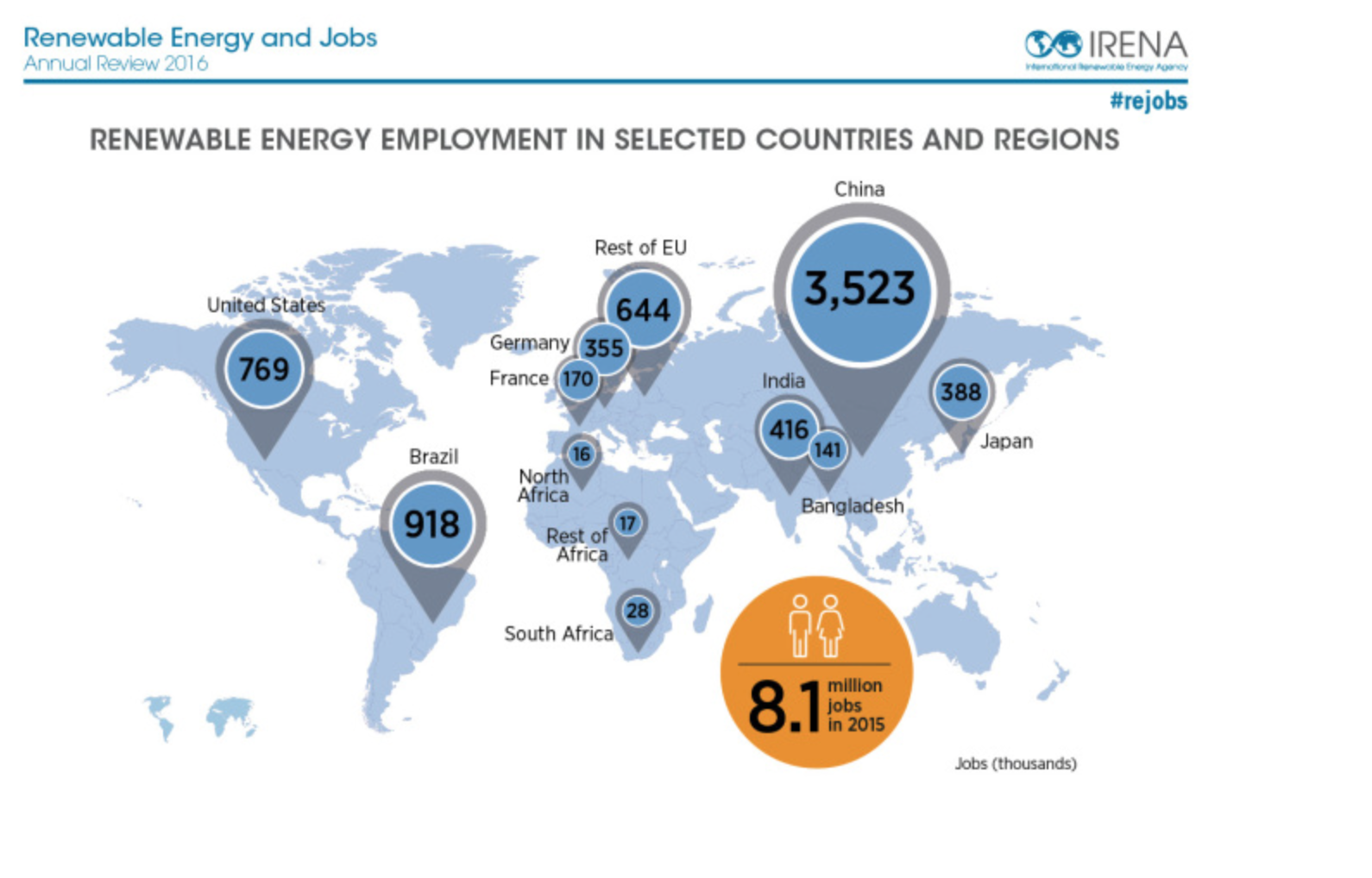 And, in the U.S., for the first time jobs in solar energy overtook those in oil and natural gas extraction, helping drive a global surge in employment in the clean-energy business as fossil fuel companies began experiencing shaky ground.

Globally, the workforce in clean energy is expected to grow to 24 million by 2030, if targets on climate change and development are met.

What does this translate to locally in Tennessee and the Southeast?

Tennessee, rich in advanced energy resources, is poised to continue rapidly expanding upon the nearly 325,00 advanced energy jobs, supported by more than 17,000 firms within the state.

Tennessee is well-positioned to keep pace with the international trend, serving as a key contributor to a booming global advanced energy economy.

The report received statewide media coverage and recognition of advanced energy as an economic driver for Tennessee and a source of high quality jobs. It was distributed to more than 200 local, state and national economic development stakeholders.

Here’s a snapshot of the media coverage from the report release, with links to the full stories. Enjoy!

Advanced energy industry grows in Tennessee (Chattanooga Times Free Press)
“Much of the growth in Tennessee is being driven by the automotive industry, which is working to reach a fleet average mileage standard of 54.5 miles per gallon by 2025.”

New report tracks Tennessee’s economic impact in ‘advanced energy’ sector (Kingsport Times-News)
“Advanced energy provides a home for Tennessee’s emerging workforce as the state attempts to get 55 percent of Tennesseans equipped with a college degree or certificate by 2025.”

TAEBC releases first-ever look at state’s advanced energy sector (Teknovation.biz)
“Advanced energy is a lucrative growth sector and a source of high quality jobs in the Volunteer State, according to a new report from the Tennessee Advanced Energy Business Council (TAEBC).”

Schneider Electric among state leaders in advanced energy sector (Daily News Journal)
“’National studies show rapid growth that outpaces the rest of the economy,’ said Matt Murray, with the Howard Baker Jr. Center for Public Policy, which produced the report. He added it also found employment growth in the sector was more robust than any other sector from 2012 to 2013.”

Stay tuned for more information about the report, which will be available online on Wednesday, June 17.