In 2019, the City of Knoxville set an ambitious clean-energy target to reduce greenhouse gas emissions by 80 percent by 2050, compared with 2005 levels. Just last year, the Knoxville Utilities Board announced that 20 percent of the city’s electricity would come from renewable sources by 2023. Today, Knoxville is on its way to becoming a leader in the region for solar energy thanks to exciting new developments.

“We take our commitment of being good stewards of our environment seriously, and we are thrilled to work with TVA to put our community on the map for renewable energy,” said Gabriel Bolas, KUB president and CEO, in a written statement. “This endeavor benefits residential and business customers who can know that their daily lives include green energy resources, leading the way to a sustainable future.”

TVA and KUB’s solar farm isn’t the only advanced energy news out of Knoxville. This past week, Mayor Indya Kincannon released her office’s proposed 2021-22 budget  that includes five key priorities, one of which is investing in a “clean and resilient future.” Using insight gathered from the Mayor’s Climate Council, the proposed budget involves:

“We can and will lead by example in reducing carbon emissions,” said Mayor Kincannon in a written statement. “My proposed budget takes the next important steps toward reaching those goals. We’re building the transformational infrastructure now that will enable us to be cleaner and greener for generations to come.”

Pilot locations for the City of Knoxville’s new LED streetlights are up and running.

The pilot locations have been serving as testbeds to be evaluated by the City, public stakeholders, and for residents to also get the chance to experience the new LEDs in action.

Since late last year, Knoxville has been gradually flipping the switch to energy-efficient lighting in several neighborhoods through these design and testing phases. 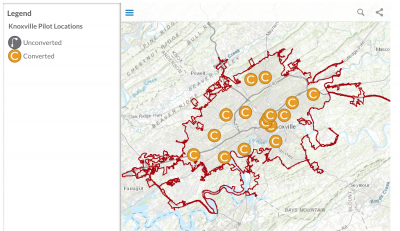 An interactive map on the City of Knoxville Office of Sustainability’s website shows select testbed areas where some of those high pressure sodium (HPS) bulbs have been converted to LEDs so far, from Western Avenue to parts of Chilhowee Drive.

According to the map, 16 locations in Knoxville have been tested out.

You may remember Knoxville chose Siemens to retrofit its nearly 30,000 streetlights in September 2017. The retrofit will cut the City’s streetlight operation budget in half by $2 million annually in energy and maintenance costs. With these savings, the investment is expected to pay for itself in less than ten years.

Once the design and testing phase is complete, Siemens expects to begin installation of the new lights across the city later this year. All work is expected to wrap up by Summer 2019.

For more detailed information about this project, click here. 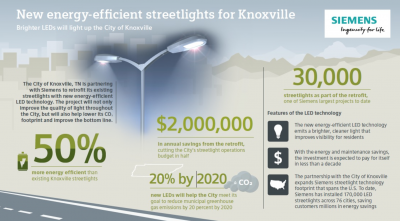 An advanced energy trend is catching on in the Volunteer State as more cities make the switch to LED lights.

Knoxville’s City Council recently approved a contract to retrofit Knoxville’s nearly 30,000 streetlights with LEDs, setting the City on a path to significantly reduce carbon emissions, according to a release.

Council approved a more than $9 million contract with Siemens. The company expects to begin installation of the new lights across the city in late 2017 or early 2018. All work is expected to be complete by June 30, 2019.

By retrofitting Knoxville’s streetlights to LED technology, the City will reduce energy use, and take a major step toward exceeding its goal of reducing emissions by 20 percent by 2020.

“Infrastructure improvements like this are excellent ways for cities across the country to improve quality of life for their citizens, save a significant amount in energy costs and meet their sustainability goals,” said Marcus Welz, CEO of Siemens Intelligent Traffic Systems.

City officials in Paris, Tennessee announced in February an energy efficiency project there will be launched. Leaders say they will be replacing more than 2,500 lights across the city to LEDs highlighting the project’s cost efficiency.

“It’s just an opportunity to do something progressive in our community and switch everything over to LED,” said City Manager Kim Foster.

Foster said they hope to start the process of replacing the lights in May, and this will be a continuing project over the next six to eight months.

The LEDs will be installed in the 911 center, the community center, the Putnam County Justice Center and agriculture buildings among others.

The light bulbs began getting replaced in June 2016 and the county has until the end of this month to complete the project.