On August 12, the Tennessee Advanced Energy Business Council hosted a webinar featuring the Los Angeles Cleantech Incubator (LACI). During the event, panelists discussed the status of a $150 billion federal stimulus proposal to strengthen our nation’s transportation infrastructure and what it could mean for Tennessee. 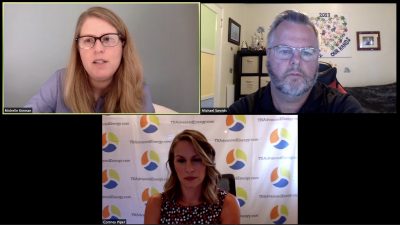 Alongside 50 other cleantech companies, organizations and government entities, TAEBC signed on to this proposal in July to once again look to the advanced energy sector for economic recovery. The webinar highlighted what this kind of investment could mean for Tennessee as state leaders eye Tennessee becoming the top spot for the country’s EV supply chain and implement statewide electrification plans.

Swords and Kincman spoke about LACI’s commitment to “building an inclusive green economy” and discussed the recommended actions included in the proposal. These recommendations include: 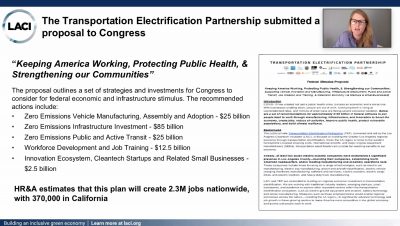 Kinman said the proposal has gained significant traction over the past few months and called it a “nationwide effort” to ensure the country is “putting Americans back to work in ways that will advance the clean energy goals.”

Regarding next steps, Swords said that LACI is working closely with organizations in Washington D.C. and having nearly daily conversations with legislators or their staff to gain traction on the recommended actions.

“There is growing bipartisan support for some of the ideas we have outlined in the proposal,” Swords said. “We’re confident that we’re going to get some movement on some of the items.”

Loved the webinar and want to view the presentation again? Download it here.