In the United States, more people were employed in solar power last year than in generating electricity through traditional energy sources (coal, gas and oil) combined.

According to a new report from the U.S. Department of Energy, solar power employed 43 percent of the Electric Power Generation sector’s workforce in 2016, while fossil fuels combined accounted for just 22 percent.

Just under 374,000 people were employed in solar energy, according to the report, while coal, gas and oil power generation combined had a workforce of slightly more than 187,000. The boom in the country’s solar workforce can be attributed to construction work associated with expanding generation capacity. About 3,548 of the 374,000 national solar jobs are filled by Tennesseans, according to The Solar Foundation’s 2016 State Jobs Appendix. Tennessee also places as #19 on The Solar Foundation’s 2016 State Jobs Appendix and 1 in every 1,875 people in the overall workforce are employed in solar companies in the Volunteer State.

The gulf in employment is growing with net generation from coal falling 53 percent over the last decade. During the same period, electricity generation from natural gas increased 33 percent while solar expanded 5,000 percent. 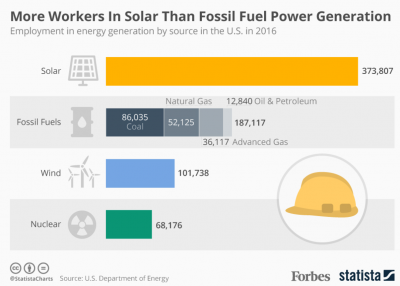 Fuel production and electricity generation together directly employed 1.9 million workers last year, according to the report, with 55%, or 1.1 million, working with fossil fuels. The DOE identifies another 2.3 million jobs associated with energy transmission, distribution and storage.

According to the Energy Information Administration, electric generation technologies are expected to add over 26 GW of utility-scale capacity over 2016. The majority of these additions are coming from three main resources: solar (9.5 GW), natural gas (8 GW), and wind (6.8 GW). Together, these three sources make up 93 percent of total additions.

For a link to the original story, click here.