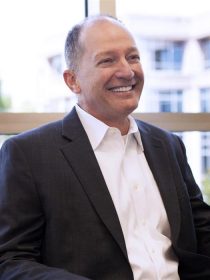 Robbin Russell began his career with Signal Energy, LLC in 2005 with the startup of the company which was then Signal Wind Energy, LLC. He is currently the Vice President of Construction. He is responsible for the construction of all projects from contract through final completion and the warranty period.

Prior to joining Signal Energy, Robbin was a project manager at several companies doing everything from apartment rehabs to installing diesel power plants in developing countries and radioactive waste cleanup at Oak Ridge. He has developed and/or built projects in Haiti, Honduras, the Democratic Republic of Congo, Malawi, Burundi and Nepal. Prior to his project management experience Robbin was a Senior Reactor Operator at TVA’s Sequoyah Nuclear Plant and proudly served nine years as a nuclear trained Surface Warfare Officer in the U.S. Navy.

Robbin received his undergraduate degree in Naval Architecture from the U.S. Naval Academy in Annapolis, MD in 1984 and his Master of Science in Engineering Management from the University of Tennessee, Chattanooga in 1998. In addition, he also received his Professional Engineering license in 1996.

Robbin has been happily married to his wife, Donna, for thirty-three years. They are both natives of West Tennessee and now reside in Chattanooga. Robbin and Donna actively serve in their church, community and around the world. When time permits, Robbin enjoys biking and swimming and pursues his passion of flying as an instrument rated private pilot.