When the Department of Energy (DOE) announced on January 14th a commitment of up to $200 million for more than 80 projects to modernize America’s grid, it left little doubt that DC is serious about increasing the reliability of the nation’s electrical delivery system. 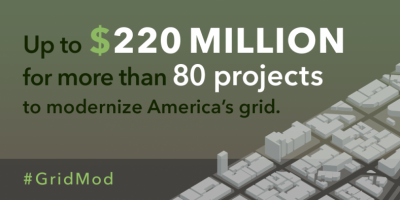 In a release, DOE Energy Secretary Ernest Moniz said, “Modernizing the U.S. electrical grid is essential to reducing carbon emissions, creating safeguards against attacks on our infrastructure, and keeping the lights on. This public-private partnership between our National Laboratories, industry, academia, and state and local government agencies will help us further strengthen our ongoing efforts to improve our electrical infrastructure so that it is prepared to respond to the nation’s energy needs for decades to come.”

Tennessee Advanced Energy Business Council (TAEBC) Charter member Oak Ridge National Laboratory (ORNL) is anticipated to play a major role in DOE’s overall plan. ORNL spokeswoman Morgan McCorkle confirmed to the News Sentinel that the lab will be involved in more than 25 of the funded projects. ORNL’s scope of work will include transformer research, analysis and testing. McCorkle also confirmed the lab will receive about $11 million in Fiscal Year 2016 and a total of $22 million over three years.

In addition, several of DOE’s grid modernization funded research projects explore the concept of microgrids, a localized group of electricity sources and loads that can disconnect and function on their own, separate from a traditional centralized grid. Microgrids are being researched and investigated here in Tennessee, both for their ability to function autonomously and for their capacity to operate as economic conditions warrant.

All of this activity is not only good for the nation but good for organizations such as TAEBC. With our Charter member ORNL playing a significant role in grid research, it’s safe to say that Tennessee overall will be a major player in advancing the resiliency, reliability, and security of the nation’s electricity delivery system.