The future looks bright indeed for advanced energy markets. According to the recently released Advanced Energy Now 2016 Market Report, prepared for AEE Navigant Research, advanced energy is a $1.4 trillion global industry, as big as fashion, twice the size of airlines, and close to worldwide spending on media and entertainment. 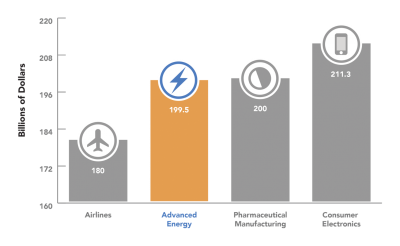 This is the fourth annual report of market size, by revenue, of the advanced energy industry, worldwide and in the United States and is the most comprehensive assessment of advanced energy markets compiled to date. The report includes five years of revenue, starting with 2011. Highlights from the U.S. market include: